Divert The Attention To 79 / 21 Rule For Long Term Business If you are all in on one form of traffic generation, that makes you vulnerable. You have to focus attention to one strategic channel that is currently the most effective, but at the same time, you should diversify your attention on other strategies as well. Hope this article will find useful. Call us today if you need help. Diversifying attention is the only way to build a real long term business.

So many people only focus on the platform that’s getting the most reach and ignore the rest.

Because I promise it’s going to happen one day.

That’s why I talk so much about tasting and exploring other platforms. It’s why I’m on virtually every platform – Snapchat, YouTube, Twitter, Facebook, Instagram, LinkedIn, Podcasts, the written word (on my blog), and more.

That’s why I’ve won and built big followings everywhere in a world where so many influencers rise and fall.

In this article, I’m going to articulate a concept I call the “79 / 21 rule” to build a long term business by not putting all your eggs in one basket.

IF YOU’RE NOT DIVERSIFYING YOUR SOCIAL MEDIA STRATEGY, YOU’RE VULNERABLE

First of all, even getting to a point where you’ve built an engaged following is super difficult – so I’m pumped if you’re there already.

But I’m also scared for you.

I’m honestly more worried about those who are starting to win on platforms like LinkedIn or Instagram because that’s when they start to get complacent. They start to put “what’s working” on a pedestal and start romanticizing it — just like bigger businesses put channels like billboards or television commercials on a pedestal even though they don’t work nearly as well anymore.

It’s happening right now with people who are winning with AdWords and landing page optimization (as the world becomes more mobile and brand-focused). It happened with MySpace stars. And it’ll happen with Instagram influencers.

Most people who are on social spend 100% of their time on the hottest platform and only put in about 70% effort into it.

I spend about 80% of my time on the hottest platform, go as hard as I possibly can on it, and spend 20% of my time getting a feel for everything else.

Here’s the best articulation of how I think about it: 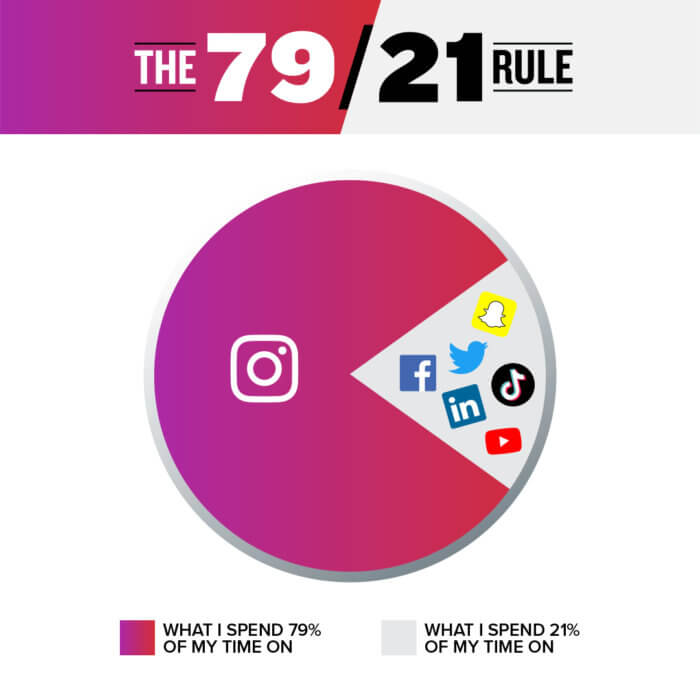 Right now, my 79-80% is spent on Instagram because it’s the most popular. I’m going the hardest on it.

And I spend 20-21% of my time on platforms like LinkedIn, Snapchat, Tik Tok, YouTube, and other stuff. Within that 20%, there are some platforms that get higher priority – LinkedIn is something I’m very, very bullish on right now so I’m spending a lot of time on it. Tik Tok is something I’m really excited about too.

The “79 / 21” rule is about diversifying attention. It’s not just about social media.

Before Facebook and AdWords existed, my “80%” was spent on email marketing. My “20%” was print, radio, direct mail, and AdWords.

Once AdWords really took off, that became my 80% and email went in my 20% along with platforms like YouTube that were up-and-coming.

“IF INSTAGRAM OR LINKEDIN BECOME IRRELEVANT, SOMETHING ELSE IS GOING TO TAKE ITS PLACE. CAN’T I JUST FOCUS ON THE NEW PLATFORM AFTER THAT HAPPENS?”

You don’t have to be the first mover to win on a platform, but it really, really helps.

I got a million followers on Twitter early because I was one of the most active people on there up front — so I got featured on the “suggested users” list and many people who signed up for Twitter followed me.

As attention shifts away from the main platform, it’ll go to the platforms in your “20%.” And those who are active on the secondary platforms will siphon most of the attention first.

“BUT I HAVE A T-SHIRT COMPANY THAT TARGETS KIDS. DO I REALLY NEED TO BE ACTIVE ON LINKEDIN?”

I would reverse engineer the audience.

LinkedIn’s organic reach is so incredible right now that it’s my top priority within my “20%.” It’ll go away in a year. Before that happens, it would be really smart for you to take advantage of it.

If you’re making t-shirts, what kind of premium product can you make for business people? How could you take your product and create content around it contextual to a business-world?

“INSTAGRAM IS BASICALLY COPYING SNAPCHAT, AND IT HAS MORE REACH. WHY DO I NEED TO BE ON BOTH?”

Because you have to be very careful when you say something is “dead” or “irrelevant.”

People said Twitter’s dead, then it started getting more important.

Several years ago, people never thought you could create content on LinkedIn, then things started changing in the last year or so.

When DJ Khaled posted those snaps from his jet ski, that started the process of Snapchat getting more and more traction. There could literally be another moment like that tomorrow, or a new feature that Snapchat releases that puts Snapchat back on the map ahead Instagram in my “80%.”